The Blackwater Chapter was organized October 26, 1933, by Mrs. L. H. (Pearle) Mott of Davis, West Virginia, who had become a member at large in October 1932. Mrs. Mott accompanied her husband, a member of the state legislature, to meetings in Charleston where she met the wife of the state treasurer, Mrs. W. S. Johnson, in the summer of 1932. Mrs. Johnson was the state chairman of Membership Committee of the DAR. She asked Mrs. Mott if she was eligible to become a member, and as a result, Mrs. Mott joined as a member at large and immediately became interested in establishing a chapter in Tucker County.

She learned of two members in the county: Mrs. Ella Nash Ward and Mrs. Lucille Roberts, both of Hambleton. Mrs. Ward belonged to the Elizabeth Cummins Jackson Chapter of Grafton. Mrs. Roberts was a member of a chapter in Pennsylvania. These two became willing helpers in establishing a Tucker County chapter through the Wheeling, West Virginia Chapter. 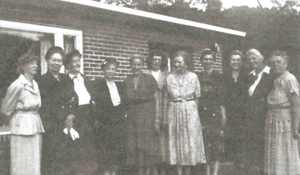 Mrs. Mott was appointed organizing regent with the task of finding members to form a chapter in Tucker County. On October 26, 1933, the chapter was organized at a dinner meeting held at the home of Mrs. Mott in Davis, West Virginia, with the State Regent, Mrs. Paul O. Reymann of Wheeling, in attendance. This chapter was to be the first in Tucker County and the 38th in the state of West Virginia.

The name of the chapter was derived from the "Blackwater River" which is the only stream of water wholly within the bounds of Tucker County. It flows from Cooper's Knob into Canaan Valley, through the Valley to the Blackwater Falls, and down the canyon where it joins Shaver's Fork at Parsons, thus forming the Cheat River.